7 years ago for Christmas I bought my wife a sounddock for her iPod. A Klipsch one. The sound was real good. Over the years, I performed many interpretive dances to today’s pop hits as my wife gawked at me, probably jealously wishing she had the insane dance flailing ability I possess.

“Dance like nobody’s watching!” I’d yell at her over the music.

“Nobody should ever have to see this!” She’d yell back.

Anyhow, a month ago the music stopped. That sounds ominous, but it’s literal. The Klipsch broke. My detective work revealed that the power cord was thoroughly chewed through by our cats, who apparently supplement their diet with sweet sweet electricity. So I figured $20 bucks for a new power cord and the music would continue again and my backed up dance moves could once again fire out through my limbs like a death row inmate in an electric chair.

No dice. New power cord and still no music. The problem lay somewhere inside the Klipsch.

I took out my toolkit and decided to dive into the abyss. With screwdriver in hand I examined the sounddock, and geared up to add a notch to my handyman’s belt, which is actually a Batman Costume utility belt. Only the son of bitch had no screws. Anywhere. No matter how many times I yelled “Reveal your screws, machine!” It showed me none.

So I googled: “Where are screws on Klipsch Sounddock?”

The screws were behind the meshy thing. Of course! The meshy thing! Why hadn’t I thought to pry that bastard off before? I popped it open using a bread knife, the preferred tool of electrical engineers and bread enthusiasts. 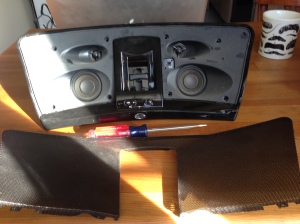 Behind that were the fabled screws I’d waited all this time to see. Just shining at me in all their screwy screwness. I deduced that the screws were holding the plastic back thingy together with the plastic front thingy. “I’m so smart,” I said to no one. “I’m gonna beat this thing.”

And then I opened it up, back thingy separating from front thingy, like the maw of some sort of robot clam from hell. 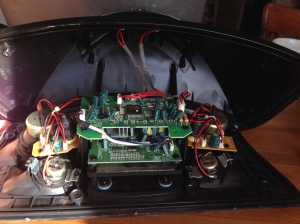 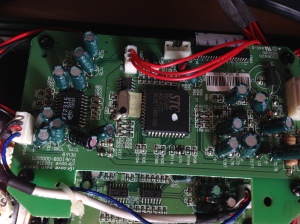 So I googled: “How do I tell what’s broken on a circuit board?”

The best result was a youtube video. An 8 minute close up of a broken circuit board, narrated by a man who sounded like he had just finished crying, was about to cry some more, and was living with the knowledge he would never feel happy again. I got through 35 seconds before I clicked on a video called “Cat Falls in Toilet LOL,” instead. While the cat video cheered me up a bunch, it didn’t help with the circuit board. I was at a stalemate. 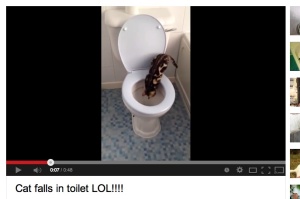 I showed this video to my cats: “This is what happens when you don’t finish high school.”

So I stared at the Klipsch. It was like being in a foreign country and meeting a foreign person who needs help, but you don’t speak the same language, so you poke them with a screwdriver over and over… but not in a murdery way.

There was one more option left. The Ace up my sleeve. So I went into the back of our closet and hid the mess I had made under a giant hat. Problem solved. 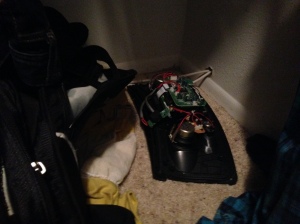 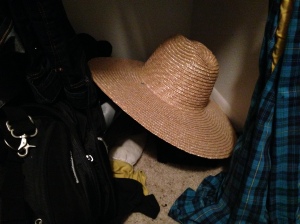